This is the fourth post of a series on Single Sign-On and OpenID Connect 1.0 security. In this post, SSRF vulnerabilities that were discovered in popular OIDC implementations (Keycloak (CVE-2020-10770) and Amazon Cognito) are explained in detail.

The series consists of following posts:

As you can see, we structure this series in an [Overview], attacks with concrete examples categorized in [Implementation] and [Specification], and finally lessons learned during the [Responsible Disclosure]. Note that this post gives detailed insights into SSRF vulnerabilities that were encountered in real-life OpenID Connect implementations, namely Keycloak and Amazon Cognito.

We made the observations within this advisory during the execution of my master’s thesis on “Single Sign-On Security: Security Analysis of real-life OpenID Connect Implementations”. The thesis was written at the chair for network and data security of Ruhr University Bochum.

Server-Side-Request-Forgery (SSRF) is a web application vulnerability. If a malicious entity exploits such a vulnerability, “the attacker can abuse functionality on the server to read or update internal resources”, according to OWASP [1].

In the context of OpenID Connect, there are multiple known and previously discussed pitfalls that could enable SSRF vulnerabilities, e.g.:

Keycloak is an open-source Identity and Access Management Software (IAM) maintained by Red Hat. In addition, Keycloak is used as a base for Red Hat’s Red Hat Single Sign-On.

The attacker model applied for the following attack is an unauthenticated web attacker model introduced by Barth et al. in 2008 [4]. In the following, the malicious entity targets a benign Identity Provider. The attacker’s objective is to gain access to internal hosts that are situated within the internal network; direct access to these hosts is restricted using a firewall.

The request_uri is an optional parameter within the OpenID Connect Authentication Request that allows specifying an external URI where the Request Object can be found. Fett et al. discovered in 2017 [3, Section III; A. 8)] that, as the Identity Provider is supposed to request the external Request Object, this parameter can easily launch an SSRF attack against the Identity Provider.

The OpenID Connect Core specification defines the request_uri as an Authentication Request parameter that “[…] enables OpenID Connect requests to be passed by reference, rather than by value” [3, Section 6]. If a Service Provider uses this parameter, the Identity Provider retrieves the Request Object “[…] from the resource at the specified URL” [5, Section 6.2].

As one can observe, if an OpenID Connect Client is set-up with default settings, the default value for this option is “Not required”. There is no option to do not support a Request Object at all, as “not required” means submitting the request object is optional, but if you submit one, it is used by Keycloak. Additionally, there is no option to manually define the request_uris parameter during manual client registration. Finally, using the default configuration, Keycloak does not require a Request Object, but supports passing the request_uri parameter with an Authentication Request. As a result, Keycloak is in its default configuration for Clients vulnerable to the SSRF attack Fett et al. described in 2017 [3, Section III; A. 8)].

A straight forward PoC to trigger the SSRF issue is given with the following URL (Authentication Response): https://keycloak.local/auth/realms/master/protocol/openid-connect/auth?scope=openid&response_type=code&redirect_uri=[Valid-RedirectURI]&state=aaaa&nonce=bbbb&client_id=[Valid-ClientID]&request_uri=http://127.0.0.1:1234

Thus, to launch the SSRF in a real-life scenario, an attacker would obtain an Authentication Request (to get the valid client_id and redirect_uri).

If the attacker then sends the Authentication Response GET request including valid client_id and redirect_uri, Keycloak sends a GET request to 127.0.0.1:1234 to fetch the Request Object resulting in blind SSRF.

By measuring the response time, a malicious actor may additionally perform a port scan of localhost or internally accessible hosts. The following ports are open on localhost:

Demo: An example using the Timeinator Burp Plugin [7] is presented below: 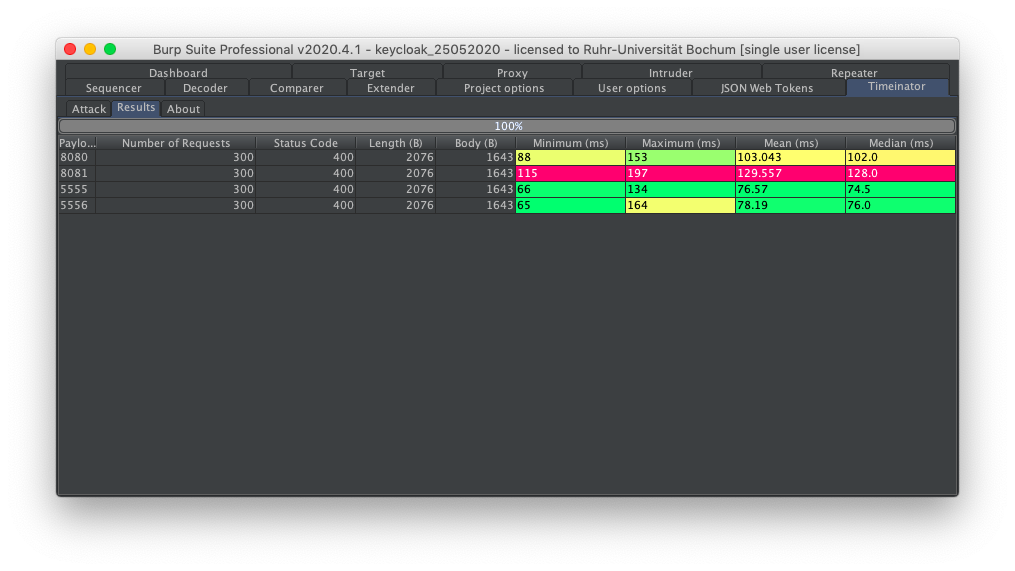 Keycloak responds significantly faster if the port is closed in our test. Thus, the Blind SSRF enables an attacker to learn about the internal network structure.

Thank you for informing about this. Since this is a Moderate impact flaw, we have 365 calendar days to publish the fix after the issue has been made public so should not be a problem publishing it on 2020-11-10.

According to the internal ticket status, Red Hat plans to resolve this issue with the upcoming major version v12 of Keycloak.

Similar to Keycloak, Amazon Cognito implements Identity and Access Management (IAM). But in contrast Amazon Cognito is a hosted service as part of the AWS family instead of a self-hosted software.

The following vulnerability was resolved by the Amazon Cognito team in August 2020. Detailed information on the Responsible Disclosure and Remediation Process will be discussed in the following.

The attacker model that is applied in the following is a malicious administrative user. The impact of attacks under this attacker model is highly conditional, but in this case, as Amazon Cognito is a hosted service, administrative users only have access to the configuration interface. The underlying infrastructure in Amazon’s hosted environment should not be accessible to external users.

A malicious actor could utilize this to perform port scans or send nearly arbitrary HTTP requests to hosts that are intentionally not exposed to the internet. An example Configuration Response is presented in the following:

The following error messages could be used to determine which ports are internally open on localhost, as the error message sent to the redirect_uri (https://a.com/cb?error_description=[ERROR]&error=invalid_request) differed depending on the underlying Transmission Control Protocol (TCP) connection. If the connection could not be established or Amazon Cognito received an HTTP error code in response to the Token Request, the following error messages were sent to the Identity Provider:

Besides the feedback an attacker received that enabled him to determine the connection’s status, there was no information on the actual response to the HTTP request. Thus, this gadget could be considered as blind SSRF to the local network. The attacker had no direct feedback but could still control a GET request (UserInfo Request) and a POST request (Token Request) regarding scheme (http or https), host (potentially localhost or internal IP), path and query parameters.

A blacklist is never perfect. Nevertheless, Amazon Cognito should introduce a restriction for internal IPs and localhost as OpenID Connect endpoints, as there is no legitimate use-case in the context of a hosted service.

The fix that was applied in late August 2020 mitigates the above described vulnerability.

Mitigations for the described issues were introduced by AWS / Amazon Cognito soon after we reported the issue on 2020-08-12.

Thanks again for bringing your security concern to our attention. We greatly appreciate and encourage reports from the security community.

I understand you wish to do a write up on this - would you be interested in sharing your draft with us before publishing so we may provide any assistance and feedback?

Special thanks to Dr.-Ing. Christian Mainka (@CheariX), Dr.-Ing. Vladislav Mladenov (@v_mladenov), Louis Jannett (@iphoneintosh) and the AWS Security / Amazon Cognito Development Team for your feedback on this post prior to publication! 🙂