During the Responsible Disclosure process Apple’s Security Team triaged the issue and outlined that they “do not see any actual security implications”.

PostScript (PS) is a Turing complete page description language. It is very powerful and if not properly sandbox, controlling a PS file that is rendered can be considered as equivalent to code execution on the host.

Even if the process is properly sanboxed, PS rendering yields Denial-of-Service risks, as @jensvoid pointed out in his talk at the German OWASP Day 2018 [1]. You should definitely have a look at his slides! Trivial endless-loops can cause harm to the underlying system:

If the macOS PostScript rendering engine encounters the above mentioned CPU DoS payload, almost instantly the normalizerd process hits 100% CPU exhaustion. It then has to be forcefully quitted using the Activity Monitor - otherwise exhaustive battery drain and heat are the immediate consequences.

But now the central question: How could this go any further than “Self-DoS”? Is the issue perhaps remotely exploitable?

A fully remote vector to run arbitrary PostScript on a victim’s Mac by embedding the payload using an iFrame with data URI as source is the following:

The data URI holds this PostScript:

As a result, Safari renders the PostScript and the Smiley is displayed within an iFrame: 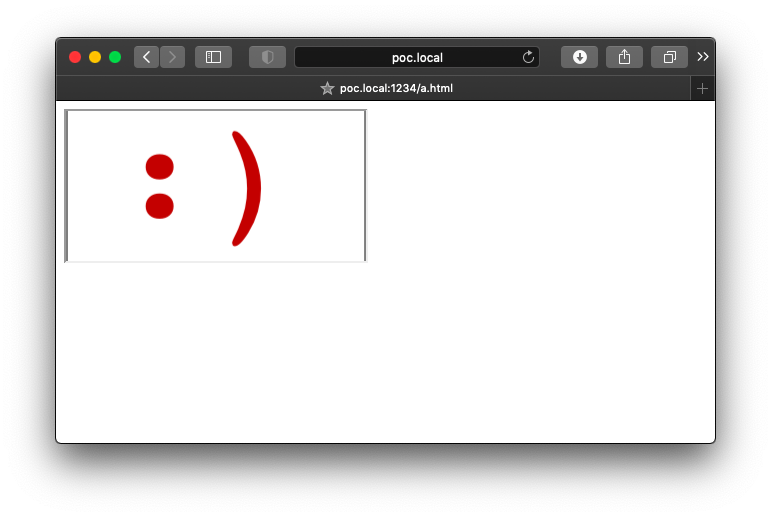 Note that in the commonly applied Web Attacker Model that was introduced by Barth et al. in 2008 [2], it is assumed that the victim visits an attacker controlled website.

Using the above example, one could also render the DoS payload mentioned earlier:

If a victim visits the above page the normalizerd process instantly consumes nearly 100% CPU:

Additionally, there is no suspicious indication at the User Interface that could make the user aware of the ongoing DoS attack.

If one saves the following file to his Mac and browses the containing folder using the finder, rendering the preview already leads to the same behavior regarding normalizerd:

Notably, this becomes especially dangerous in regard of AirDrop. If a victim accepts to receive a malicious PostScript file from the attacker, the rendered preview after download triggers the DoS payload. Even worse, if the victim browses the download folder again after reboot, the normalizerd process freaks out again.

Finally, the finder’s preview rendering of HTML files in combination with the iFrame payload “DoS 1” leads to the exact same behavior (PostScript evaluation leading to DoS) regarding normalizerd. Just save the file from “DoS 1” and browse the containing folder:

As previously outlined, prerequisite to launch an attack under the web attacker model is that the victim visits an attacker controlled website.

The PS rendering under macOS is sandboxed. Under the assumption that this sandbox is implemented correctly, we still showed the possibility to exhaust resources of the victim’s Mac. Notably, only stopping the normalizerd process forcefully resolves the issue. Additionally, the attacker’s actions can be hidden so that the victim can not directly notice an ongoing attack, e.g. using a hidden iFrame.

In case of a bypass for the sandbox - which is not that unlikely it may initially sound, if you consider previous research like CVE-2018-19409, CVE-2019-14811, CVE-2019-14812, CVE-2019-14813, … - the described behavior opens a huge attack surface for remotely exploitable Remote Code Execution flaws. Basically, if you chain the “gadget” presented within this report with a sandbox bypass, you can directly target millions of macOS Safari users and cause notable harm.

Likewise other popular browsers, Safari should download contents with MIME type application/postscript instead of rendering them.